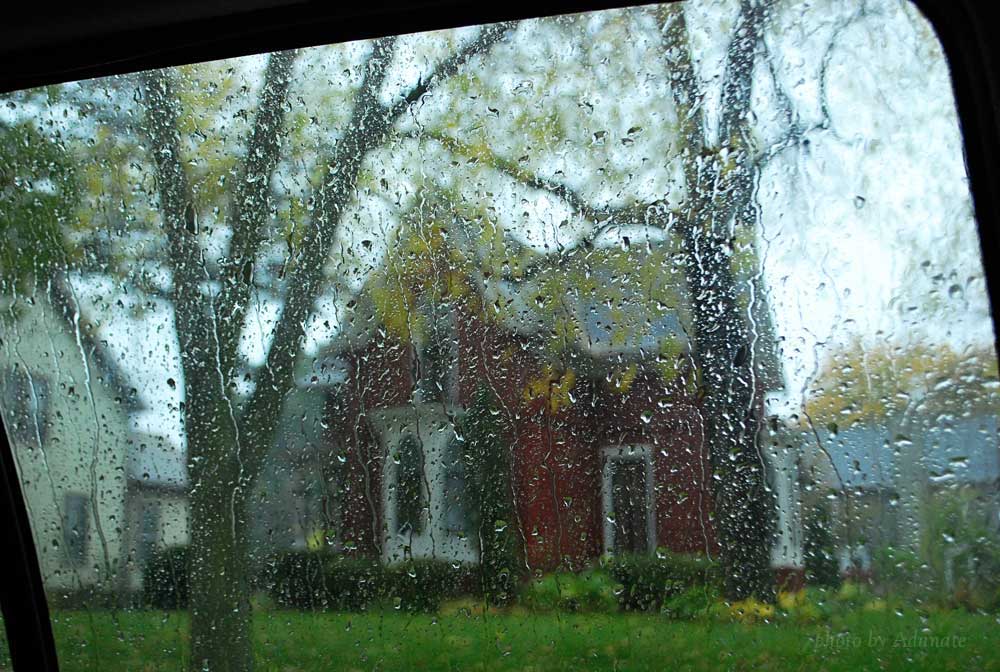 Rainy days and Mondays always get me down. Oops, except it’s not Monday—four days into our trip and I’m already mixing up my days. And the rain hasn’t gotten us down because: 1) we really need it, and 2) traveling in the rain is actually quite cozy.

If you don’t mind water-streamed pictures, that is. I liked this house, what I could see of it. The rain was really coming down!

The fourth stop on our Octoberfest Beer Tour was Monroe, Wis., the Swiss Cheese Capital of the world. It’s also the only city in North America still producing Limburger cheese—I’ll pass on that one, but just want to let you know in case you like smelling dirty socks.

And, of course, Monroe is also home to the Minhas Craft Brewery.

But let’s digress a bit for some philosophical discussion. Let’s talk about small town development and survival. 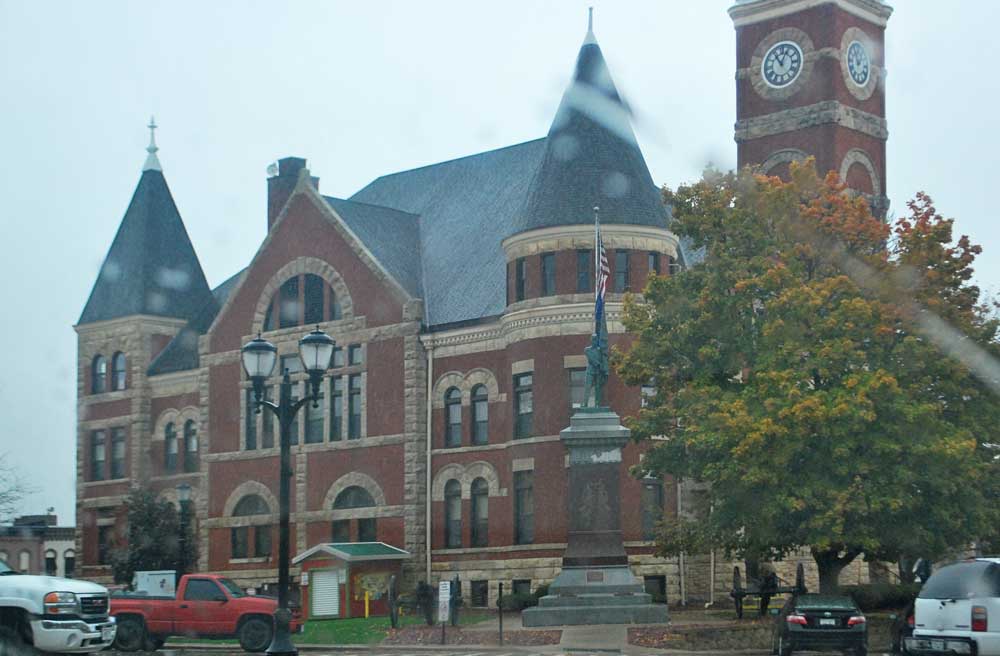 Monroe is the county seat of Green County. With a population of 10,780, it’s also the largest town in this rural area of south central Wisconsin. Isn’t that an awesome county courthouse?! 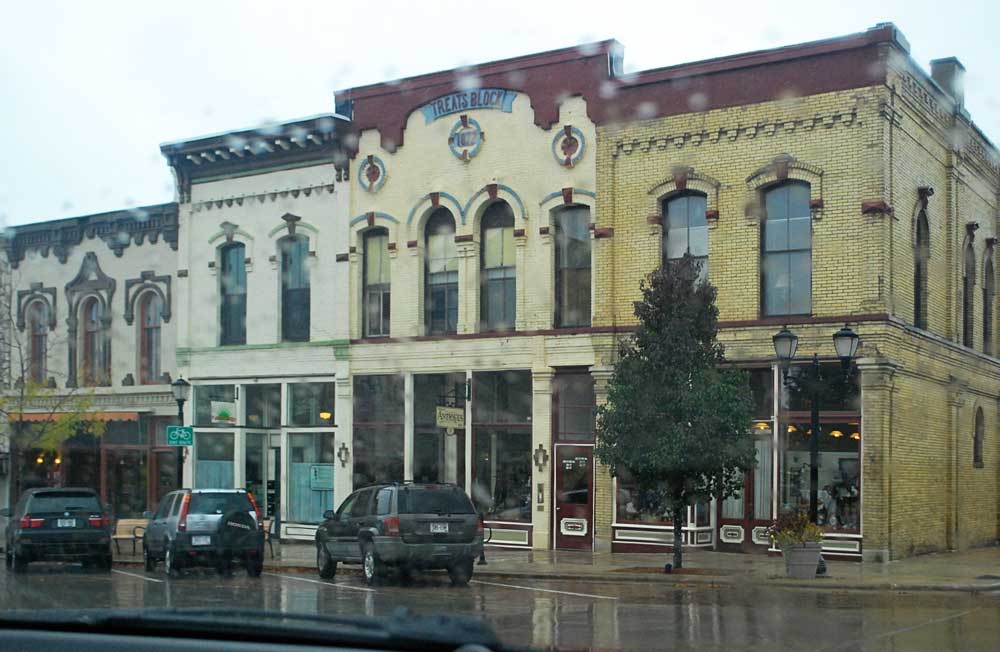 The courthouse creates a downtown square and this is what the streets surrounding it look like. 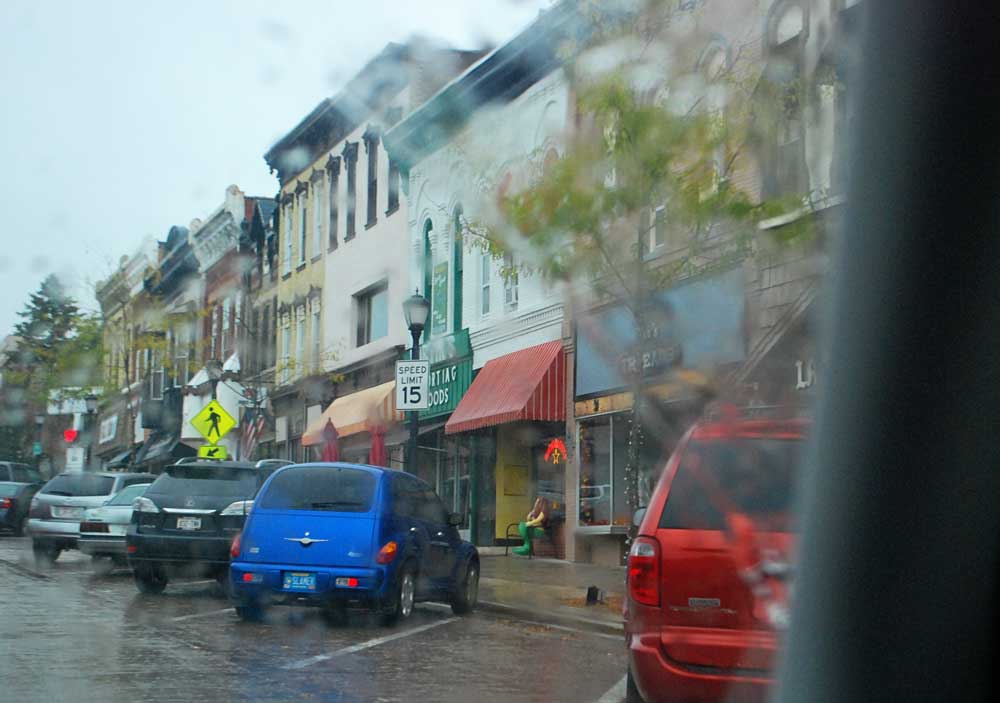 And parked in front of the stores are cars, as if people are actually patronizing them! Doesn’t it remind you of main streets of the 1950-60s?

Surely, I speculated, this town does not have a Walmart. Because we all know the big Save-Money-Live-Better (cough) Walmart kills the local businesses of every small town it invades. Well, guess what. On the outskirts of town, Monroe not only has a Walmart, but also a Shopko and a complete strip mall of corporate-owned stores.

So what gives? How can Monroe’s 10,000 people support a full lineup of downtown commerce and a Wal-Mart when my hometown of Watertown can barely support a few Main Street stores? What could my town, and others like it, do differently to encourage private entrepreneurs to take a risk and open their own stores?

Speaking of risks, the story of Minhas Brewery is an interesting one.

(We thought parking smack in front of the door would keep us dry as we dashed inside. Then we saw the “please use other door” sign. Oh well.)

Founded in 1845, the brewery in Monroe has been owned by a number of people and branded under several names. Now known as Minhas, it’s the oldest brewery in the Midwest and the second oldest in the nation (Ying Ling is the oldest, a trivia question our tour guide asked on the tour). 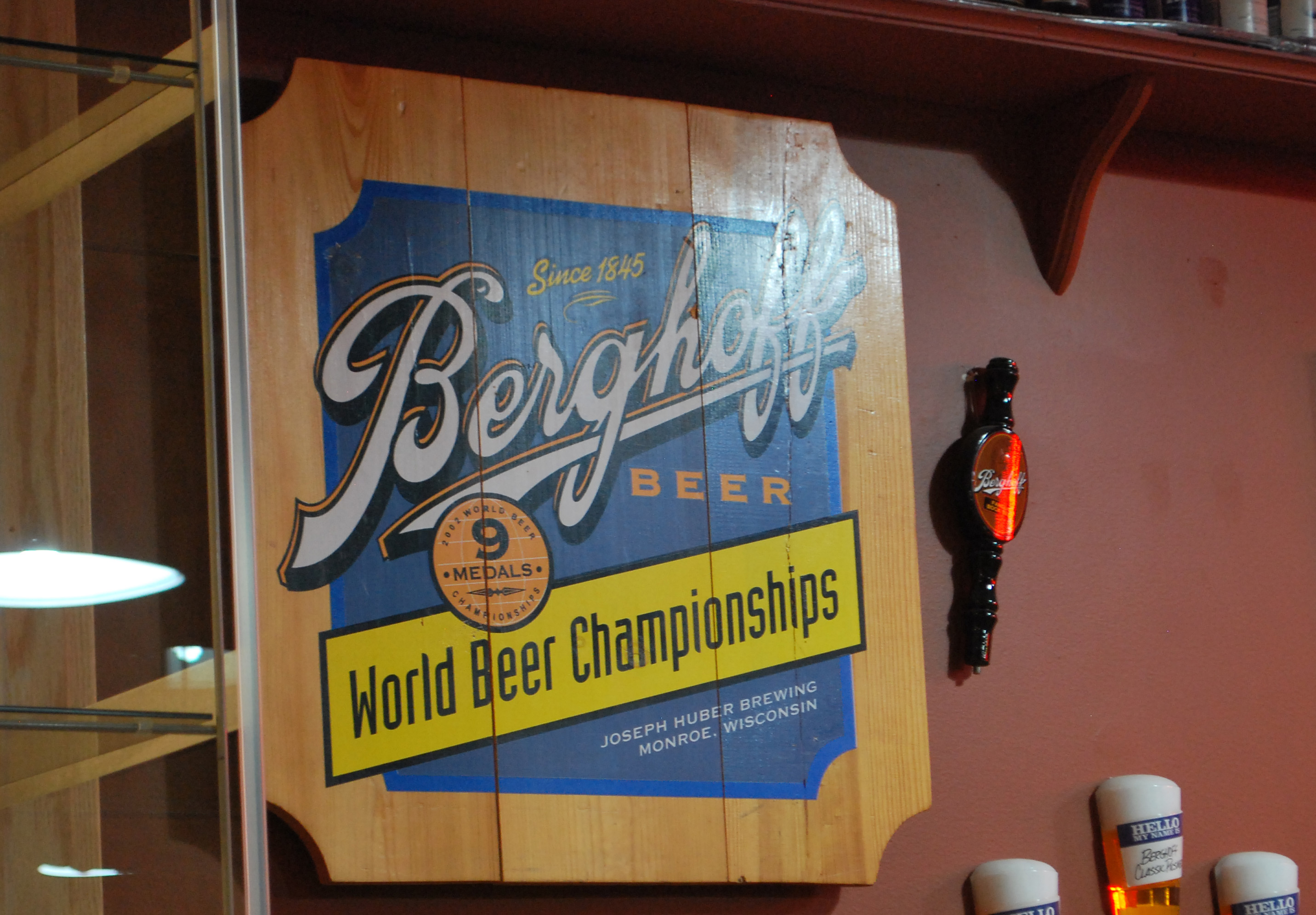 Like all breweries, the brewery in Monroe has brewed through industry ups and downs. In the 1990s, under the name of Joseph Huber Brewing Company, it introduced the Berghoff Beer. At a time when many other breweries were going flat, Berghoff kept the brewery afloat. It later sold Berghoff brand.

In 2006, the Minhas brother-sister duo purchased the Monroe brewery, changed its name to Minhas Craft Brewery, and invested in many improvements. Under their watch, production has gone from 85,000 barrels a year in 2006, to 320,000 in 2013, making it the Brewing Association’s 11th of the Top 50 Overall U.S. Brewing Companies. 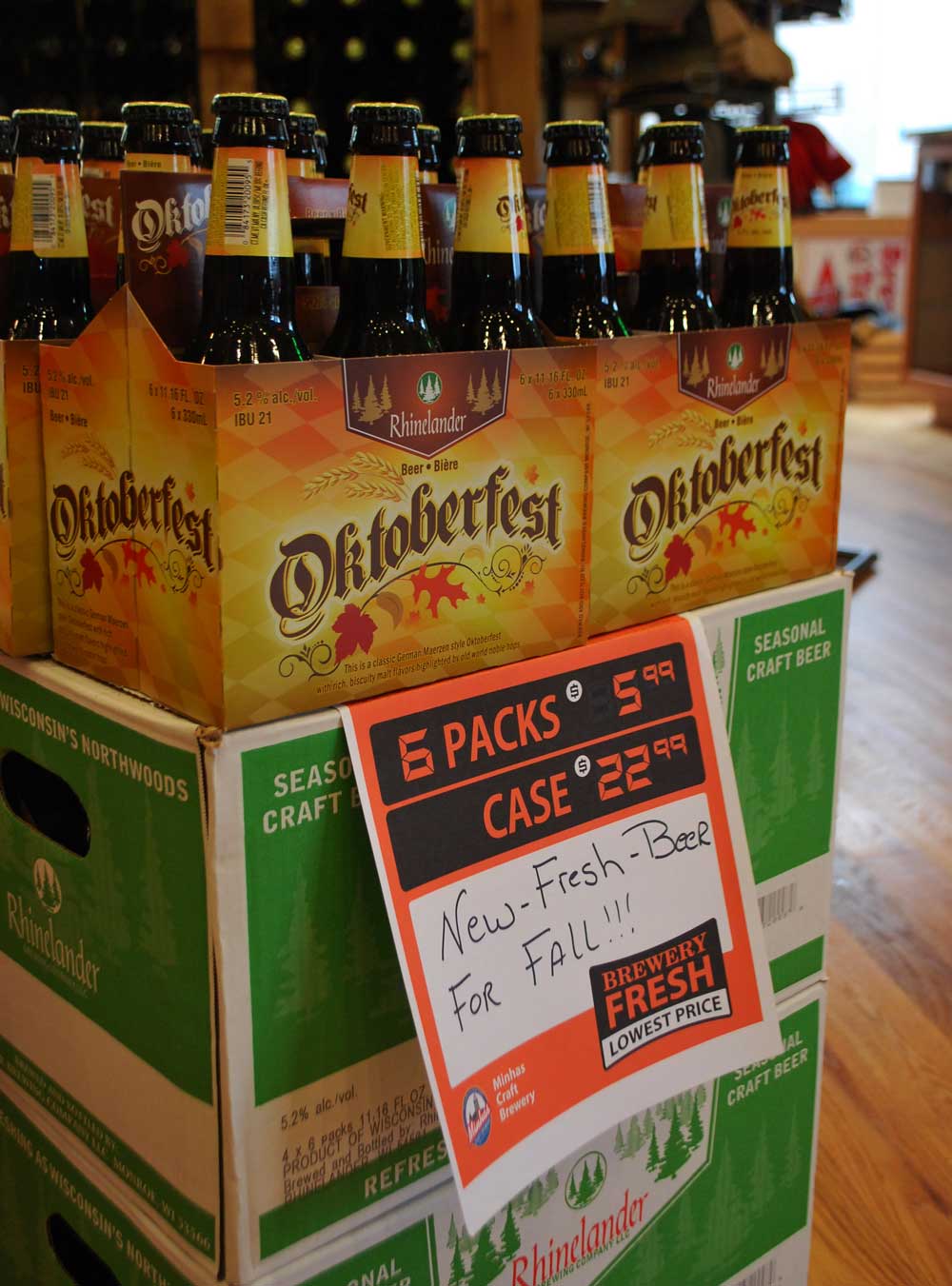 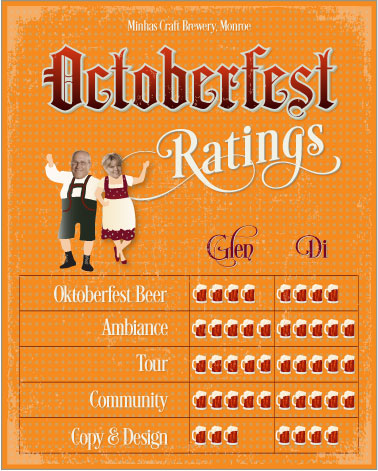 Oktoberfest Beer
Minhas doesn’t allow guests to take pictures beyond the gift shop. But they did offer us some tasty sampling! Their Oktoberfest is good, but not enough for us to buy a 6-pack. After all, as part of the tour, we each left with a variety pack of five beers and a glass.

Ambiance
Any idea how growlers got their name? According to the brewery’s Herb and Helen Haydock World of Beer Memorabilia Museum, in the old days men would send their children to the corner pub with pails to be filled with beer. The men would get “growly” if they came back with too much foam and not enough beer.

The museum is great and, oh, how I wished we could shoot photos! It’s filled with beer memorabilia and advertising from all over the world. It’s a wonderful study in art, design and type, as well as the history of beer.

Tour
Great tour! Our guide, Tammy, was a walking encyclopedia on beer and Minhas. As we trailed through the fermenting, bottling and labeling buildings, she detailed each of the processes. She is proud of Minhas and represents her company wonderfully.

Community
Our time in Monroe was only a few rainy hours, but we were still impressed. We checked out the Minhas Distillery store and stocked up at Roth Kase Cheese. I love that the community holds strong to its brewing, cheese and agricultural roots.

Copy and Design
I like how Minhas celebrates the community by using the courthouse in their logo. I also like their website—the depth of information they offer is awesome, with lots of good imagery.

Next stop: Cassville,WI, and up the Great River Road