An annual report and save-the-date postcards are spring projects I enjoy doing for my client Forward Mutual Insurance Company. This year is special. Forward’s president and CEO is retiring after 33 years of defining leadership and the company is honoring him with great hoopla. Normally, Forward does a news release after the meeting, however this year I suggested we run an advance article as well. The committed president of a successful mutual is newsworthy indeed and I’m honored for the opportunity to write this story. 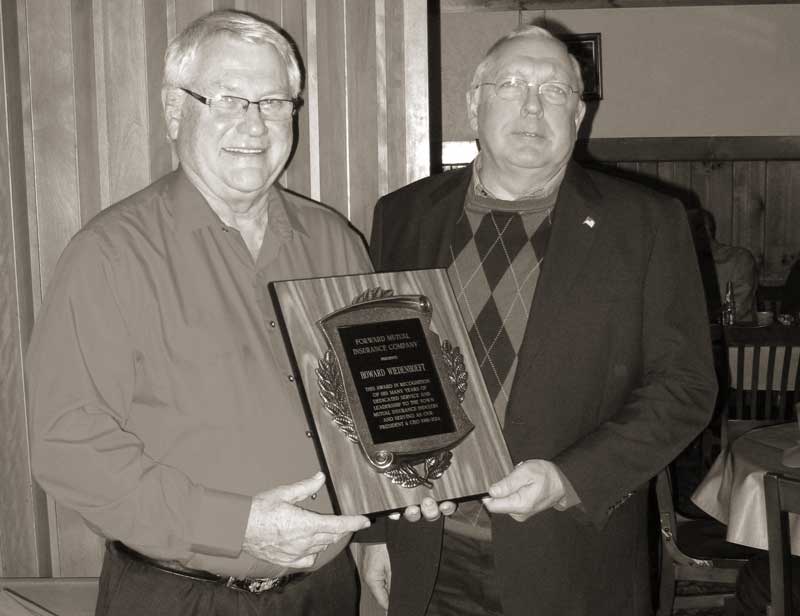 Chairman of the board Stephen Zillmer recently represented Forward Mutual Insurance Company in expressing gratitude to President and CEO Howard Wiedenhoeft, left, for his many years of service. Wiedenhoeft will be retiring at the end of March after managing the company for 33 years.

WIEDENHOEFT TO BE HONORED FOR HIS SERVICE TO INSURANCE FIRM

IXONIA, WI – Forward Mutual Insurance Company will recognize the retirement of Howard Wiedenhoeft at its annual policyholders meeting on March 22 in Ixonia. Wiedenhoeft has managed the company for 33 years.

In 1981, when Wiedenhoeft agreed to serve as secretary-treasurer of the board for Ixonia Mutual Insurance Company, he did so on two conditions—that the company acquire a permanent address and its own phone number.

Wiedenhoeft was well-qualified for managing a rural mutual insurance company. As a fifth generation farmer on his family’s rural Ixonia dairy farm, he understood the agricultural industry that at that time made up a majority of the mutual’s customer base. Wiedenhoeft also was experienced in the insurance industry, having founded Ixonia Insurance Agency in 1974.

Throughout his career Wiedenhoeft has been an innovative visionary for the mutual. In 1990 he began the application process for A.M. Best Ratings, a proprietary rating system of creditworthiness. By 1994, the company was awarded a B+ and since 2002 has maintained an A-.

Wiedenhoeft is professionally involved outside Forward Mutual as well. He served on the NAMIC Farm Conference Committee from 1993-1999, serving as chairman in 1997. He served as a board member for WAMIC from 1992–1998, serving as president in 1996. He was named WAMIC’s person of the year in 2013. Currently, Wiedenhoeft is serving on the Wisconsin Commissioner of Insurance Property and Casualty Advisor Committee, is a member of NAMIC’s Merit Society and maintains his Professional Farm Mutual Manager designation.

When asked who has been the most important person he’s worked with in his career, Wiedenhoeft immediately says his wife, Lois.

“Lois actually started working for Ixonia Mutual the year before I did. She worked part-time as a policy processor,” says Wiedenhoeft. “I wouldn’t have taken the job without Lois. We’ve worked together every day all these years. We’ve never fought about money or kids, but once in a while we have about insurance.”

Although he’s no longer running his acreage, Wiedenhoeft and Lois continue to live on their family farm. They have three children; Lisa, Laura and Michael, and five grandchildren.

“When I took the position for Ixonia Mutual in 1981, I vowed I would never resist change. Change is necessary to move forward into the future,” says Wiedenhoeft. “I’ve now come to the age where change is harder to do. My goal was to leave the mutual as strong and vibrant as it was when I started. I think it is.”

The annual policyholders’ meeting for Forward Mutual Insurance Company will take place on Saturday, March 22 at 1:30 p.m. at the Ixonia Fireman’s Hall. A luncheon to honor Wiedenhoeft will be held before the meeting, from 11 a.m. to 1 p.m.

Article as published in the Watertown Daily Times