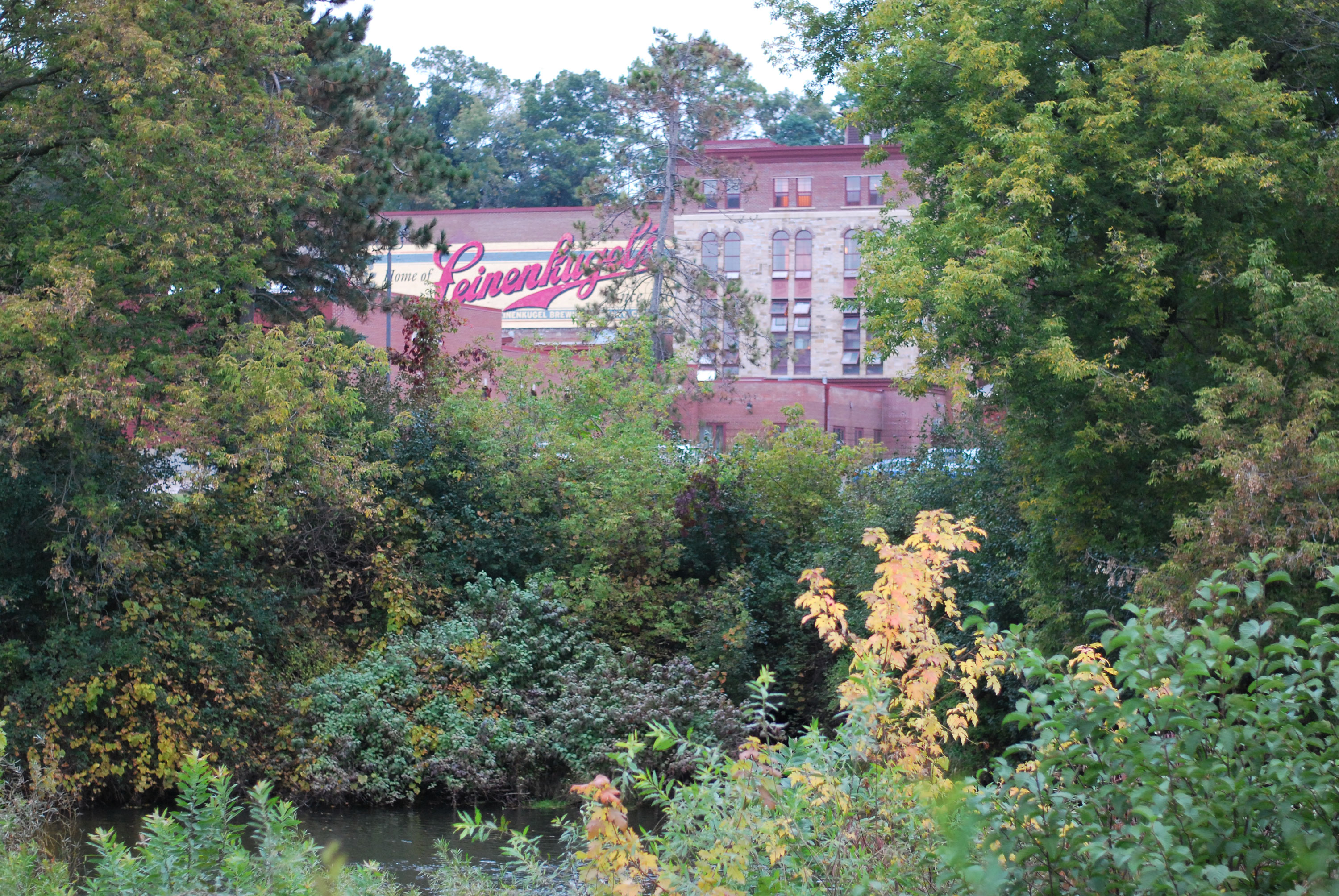 Way back in 1867, Jacob Leinenkugel and John Miller founded the Jacob Leinenkugel Brewing Company. Jacob brewed the beer and John delivered it throughout the quaint town of Chippewa Falls, Wisconsin. Yes, this is the same Chippewa Falls where Jack Dawson, of Titanic fame, erroneously spent his childhood ice fishing on Lake Wissota. But that’s beside the point. 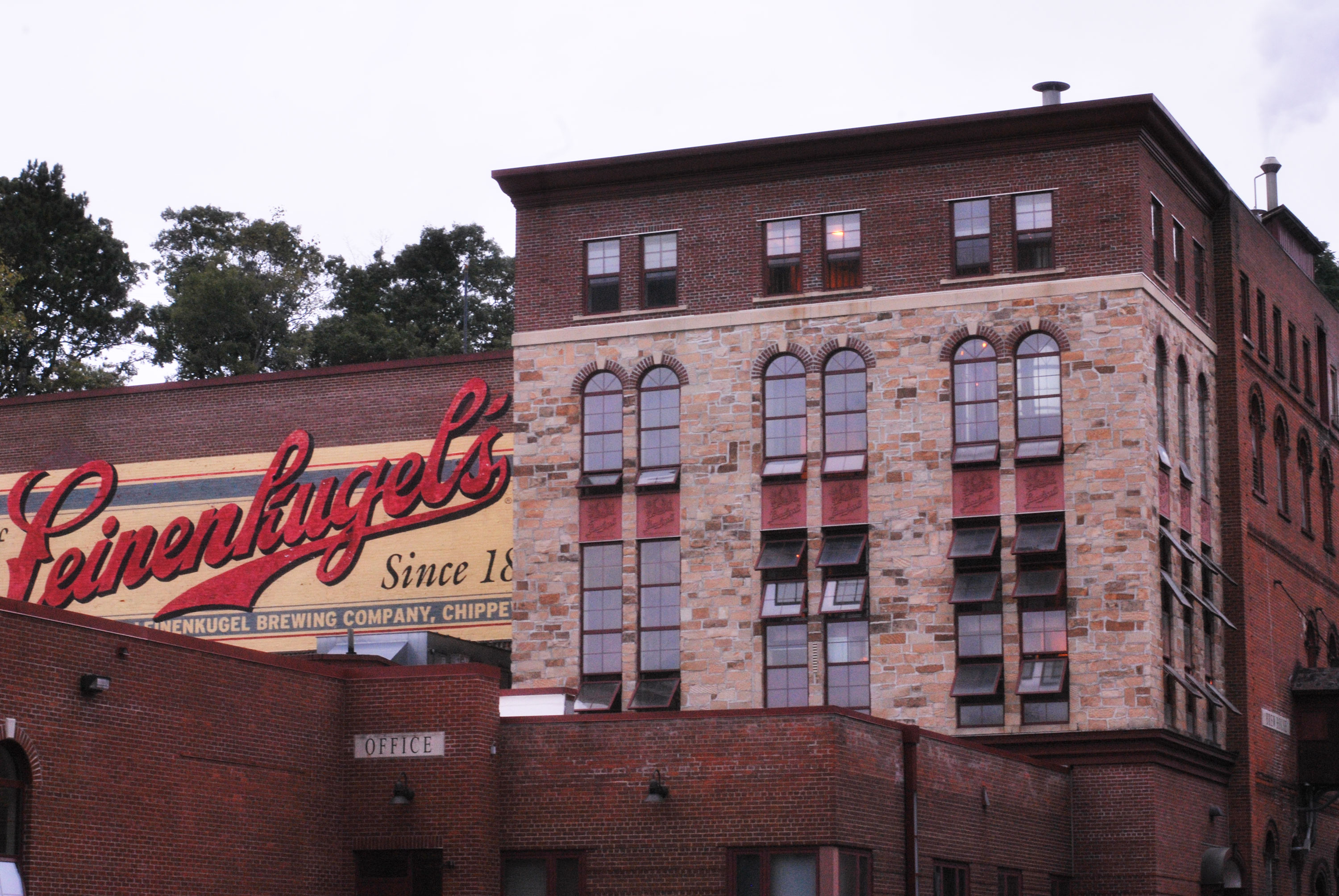 Fifteen decades and six generations later, the Leinenkugel family is still brewing away. Except for one thing—they sold out.

(Leinenkugels prefer to call it a merge.) 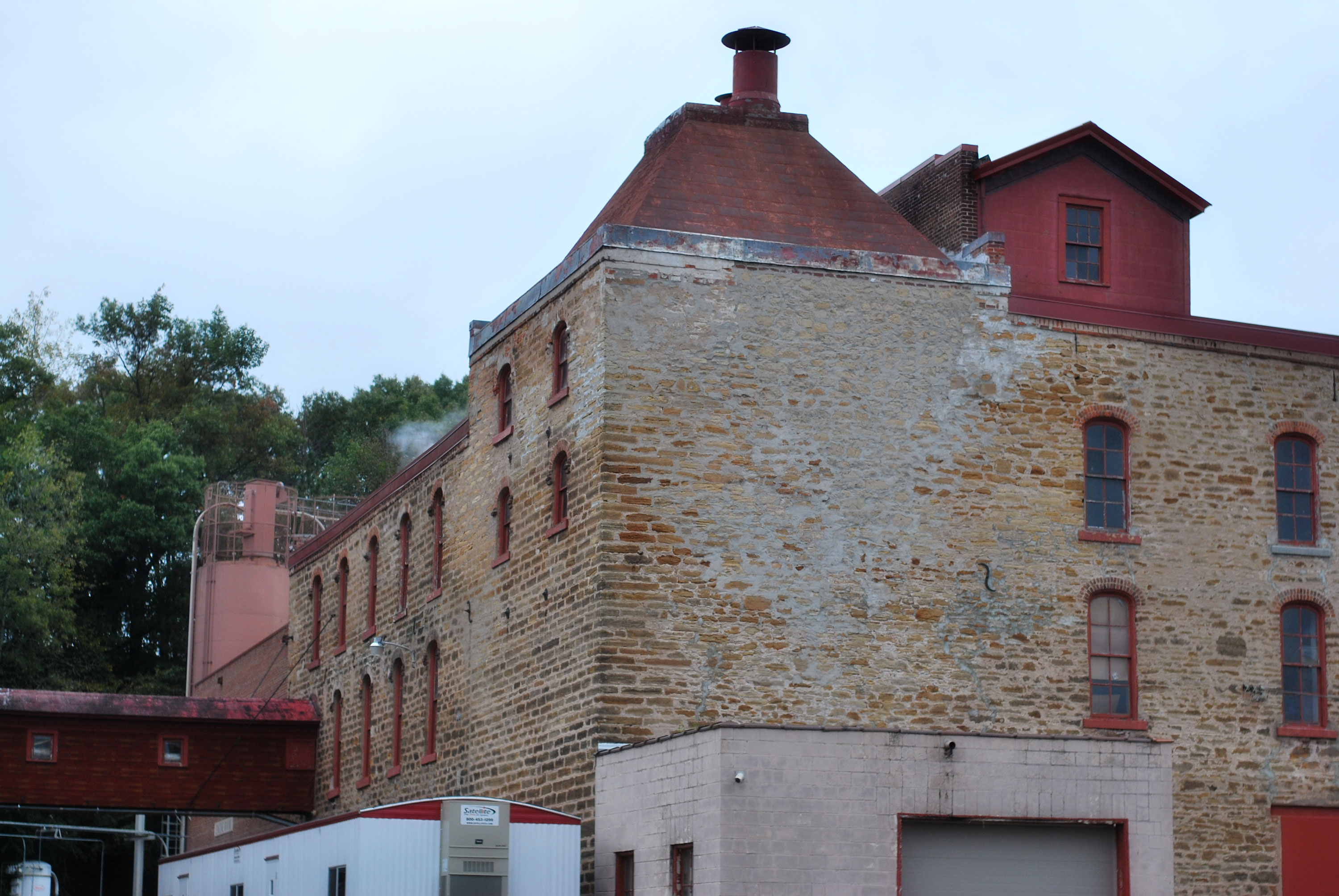 In 1988, Leinenkugel’s was acquired by Miller Brewing Company, a major manufacturer based in Milwaukee. In 1999, Miller was acquired by SABMiller, the second largest brewing company in the world. Now today, the acquisition of all acquisitions is bubbling with the upcoming sale of SABMiller to Anheuser-Busch InBev, the largest brewing company in the world.

That there is one chunk of change passing between hoppy hands, don’t you think? Except these are publicly traded companies and we could easily wager that the hands managing them have never touched a single flower of hops. These two companies—soon to become one—control every major label found on taps and shelves today. They do this with a single mindset—profit.

Can we say conglomerate? 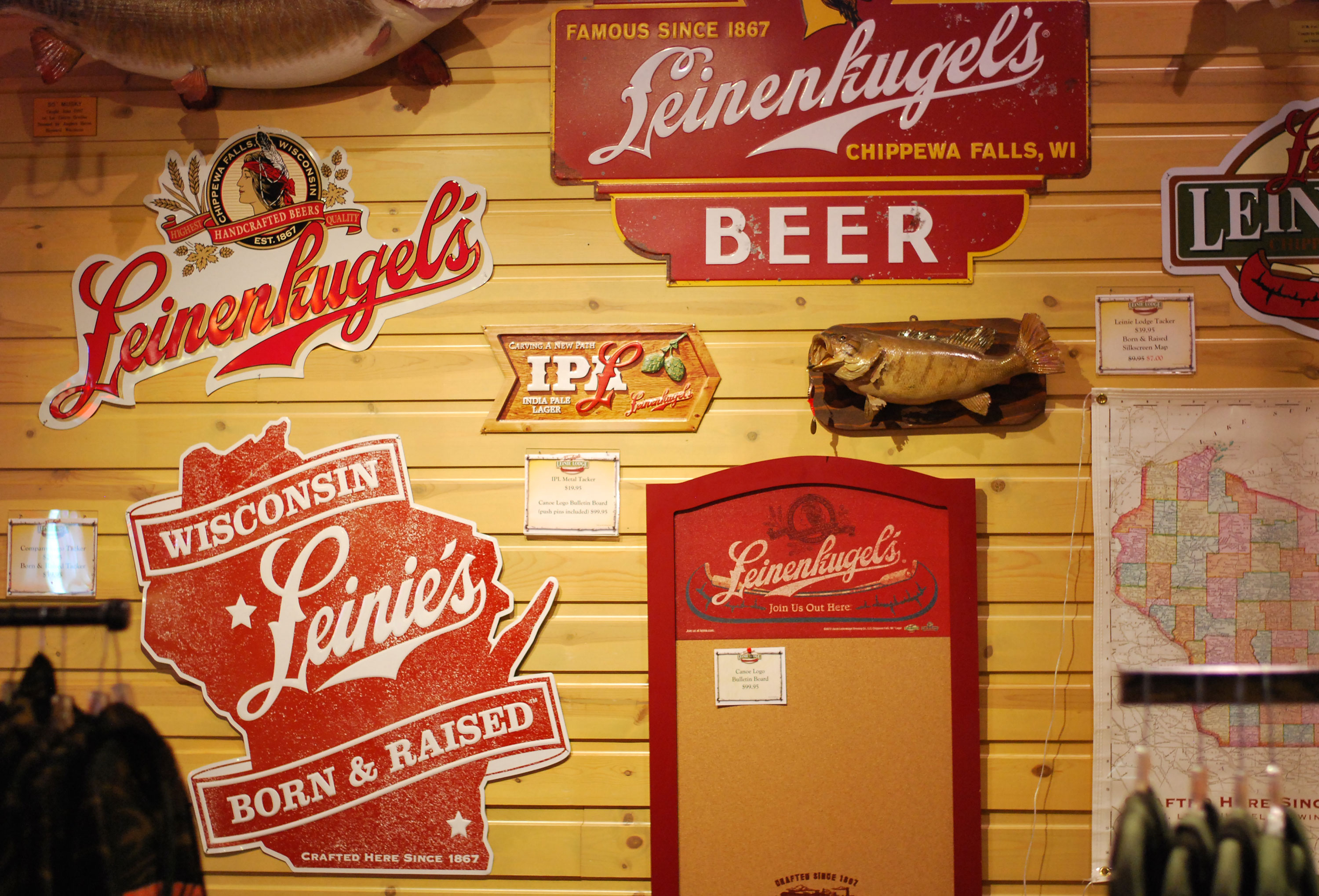 Visiting Leinenkugels on our Octoberfest Brewery Tour was interesting. Unfortunately, we arrived too late for the tour and weren’t able to see those gorgeous, old buildings. But the Leinie Lodge was intriguing in a touristy way. This is especially true if you crave every bit of Leinie’s miscellanea possible, all using the very distinctive Leinenkugel script with underlining swoosh. (Being that it was the fifth day of our weeklong tour, we did not experience any such cravings.) 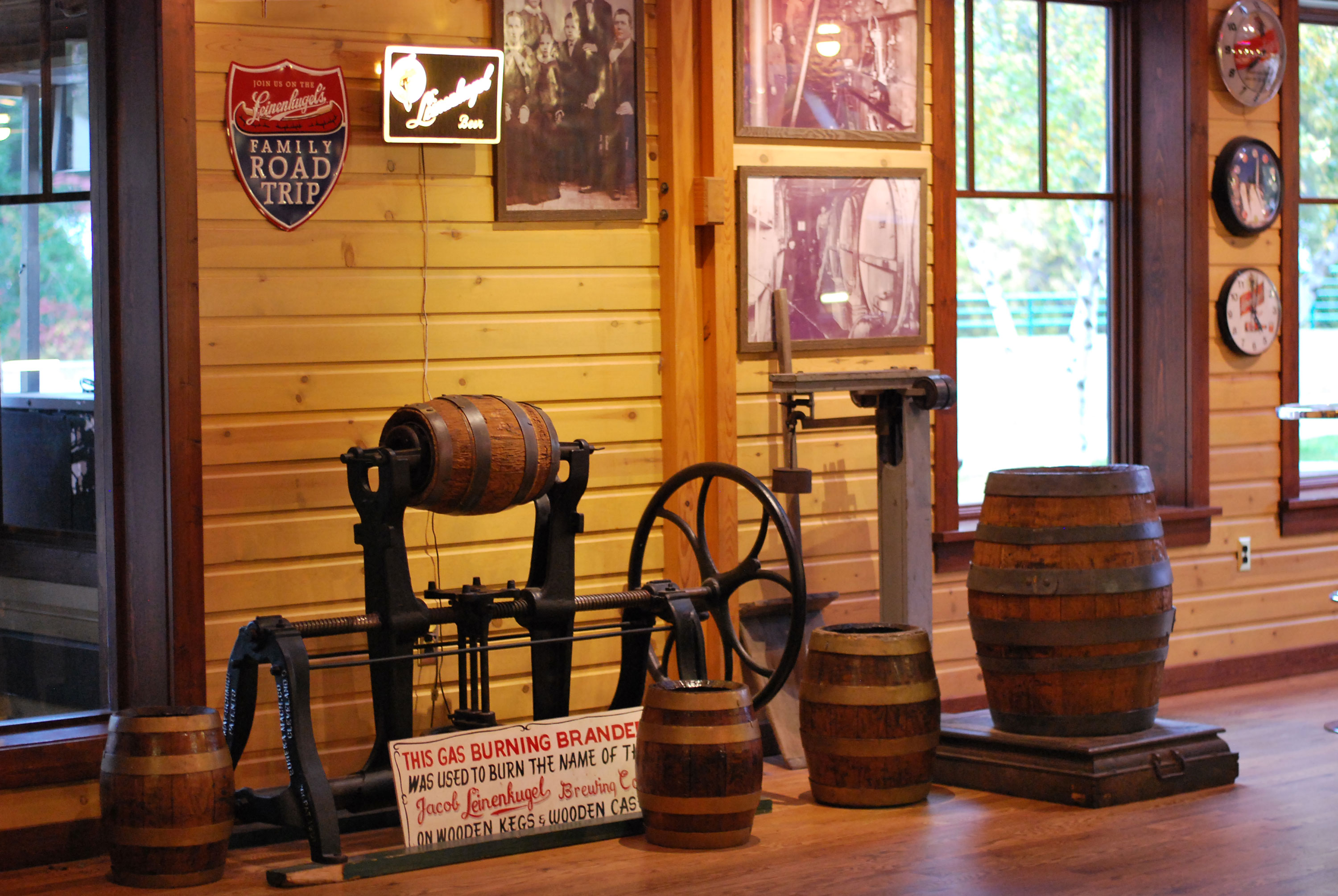 There were several displays attributing the company’s original history, although they did feel somewhat commercialized. Need a barrel? Buy one here.

Yes, we had a fun visit to Leinenkugel’s. But being the simple, independent girl that I am, I couldn’t help wondering where’s the heart?

Where’s the heritage, like that of Schell’s Brewery, the second oldest family-owned brewery in the U.S.? (My husband and I drank Schell’s beer when we were college punks. Now decades later and with much more appreciation, we hope to return on an Octoberfest Brewery Tour.)

Where’s the welcoming hearth of artisans like Pearl Street Brewery, located in a repurposed, historic warehouse, or Central Waters Brewing, which is committed to environmental sustainability? These are darn good breweries where you can talk tap with the owner and see the magic happening just beyond the bar.

But most of all, where’s the humble, hard-working, entrepreneuring gumption that builds something from nothing? Something really special. I love New Glarus Brewing Company and how Dan Carey, co-owner and brewmaster, describes themselves as poor kids who fought their way up. Or how his wife Deb Carey, founder and president, has a “love of people, regardless of stature, education, or inheritance.” She believes it’s the “responsibility of companies to provide care for the employees who may very well spend their entire lives helping to make that business successful.”

Okay, obviously, like most consumers, I’m driven by emotion. I’m a fan of the little guys and it’s my opinion they produce a better product, beer or otherwise. Knowing this, I recognize I need to exercise a bit of pragmatic reality, especially since my understanding of economics is limited. Therefore, I’m trying to look the issue from various sides.

Check out this Milwaukee Business Journal article where then-president Jacob Leinenkugel says the Miller Brewing acquisition took them out of survival mode and enabled them to become a sixth-generation brewer. Or this article by Bloomberg Business, where, after purchasing the Chicago crafter Goose Island Beer Company, AB InBev topped it off with more employees and expensive equipment so it could expand its line.

Now google “AB InBev lobbying.” You quickly suspect a seedy underbelly to the corporate giant and that its surface altruism is as self-serving as a bartender giving away free drinks to make more tips. Not only is AB InBev taking control of production, it’s also muscling its way into distribution via lobbying dollars and distributor company purchases.

Many beer aficionados worry AB InBev and like-minded corporations will destroy the spirit of the craft industry. They predict the craft labels AB InBev purchases will diminish in quality. They are concerned that small, independent brewers will be pushed out of distribution.

What do you think?

This is me today. Getting frustrated because every