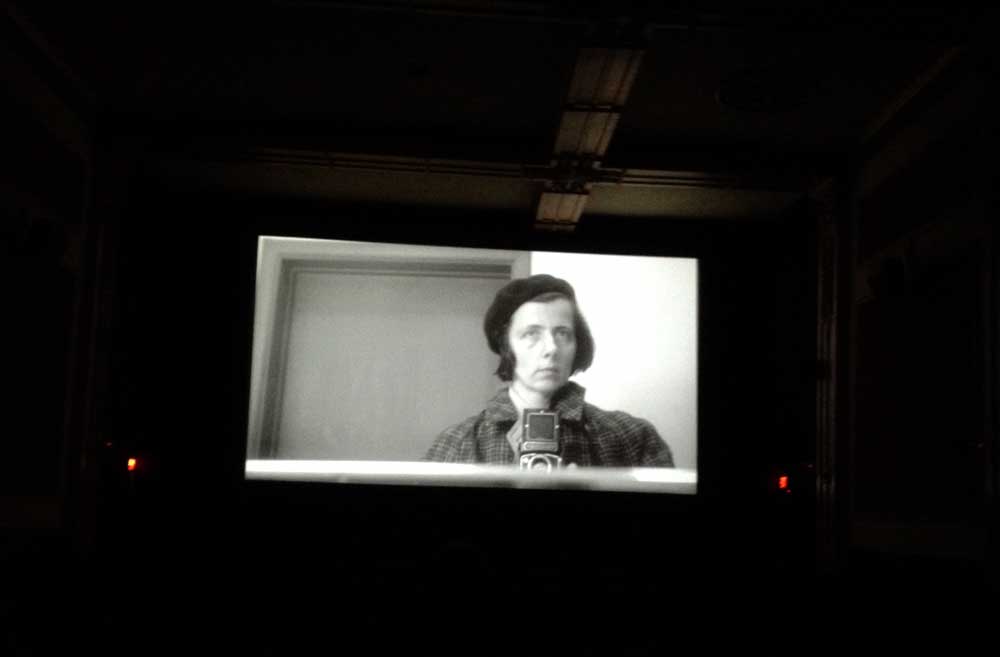 Last Friday I took the afternoon off and headed into Milwaukee to see Finding Vivian Maier at the historic Downer Theater. Normally, I wouldn’t have my cell phone out, but this was a matinee and I was one of only seven people in the whole theater. I couldn’t resist a quick shot.

The documentary was great. Actually the whole story is fascinating—a mysterious nanny, thousands of secret photographs, and a fortuitous discovery at a Chicago auction house. The film, co-directed by John Maloof and Charlie Siskal (film critic Gene Siskel’s nephew), is narrated by Maloof. He describes inadvertently buying a trove of undeveloped film and, upon developing it, realizing the treasure he had. He then shares his quest to learn exactly who Vivian Maier was.

Maier’s photography is stunning. It’s classic street photography in that she captured people in their natural condition in the public places of New York and Chicago. Couples holding hands, bums laying in the street, children playing—she shot them all with great artistry and emotion. The documentary showcases many of her pieces. I would love to see more.

The film also touches on sensitive issues, like who gets to anoint work into the chosen world of art, or the integrity of spotlighting an intentionally elusive woman. Many galleries initially rejected Maloof’s promotion of her photography. But when he posted images on his blog and Flickr, the public went crazy with approval.

Throughout her lifetime Maier kept her work obsessively private. Yet Maloof is now presenting it to the world. In the documentary he allows others to defend his position, saying the value of Maier’s work should not be hid.

I have to agree.