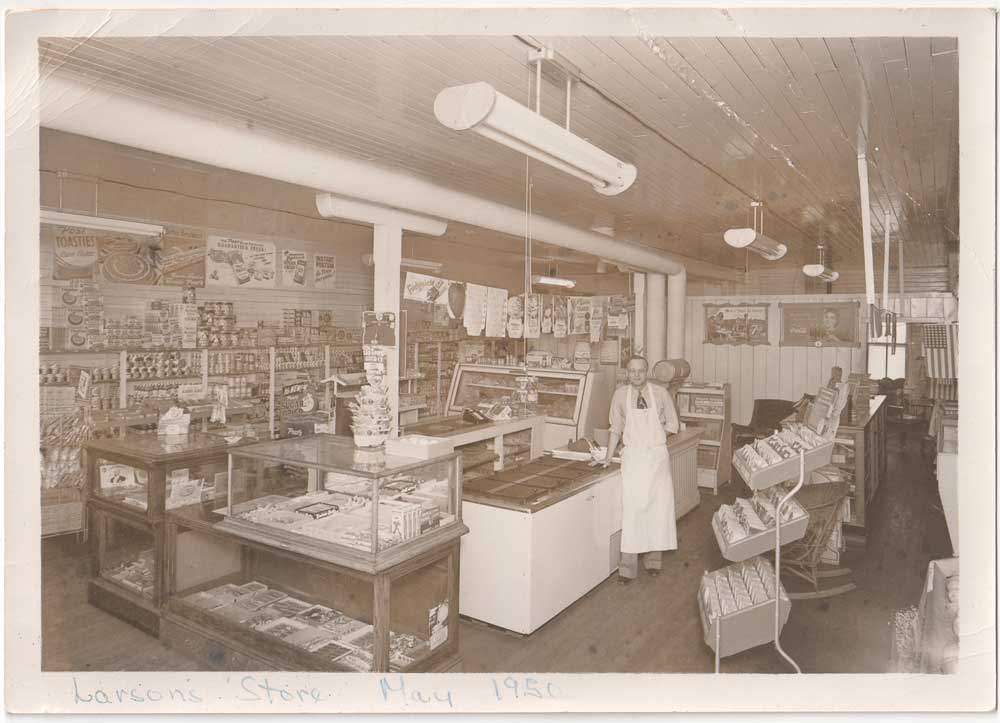 When I was young, my grandparents owned a general store. It was one of those mom-and-pop groceries, complete with creaky wooden floors and penny candy display behind the counter. This is my grandfather George proudly showcasing his adventure a few years after purchasing the business.

I pulled out this photo because February 15-22 is National Entrepreneurship Week and my grandparents were the most daring, go-getters I know. As I look at this I’m thinking they shared many of the unique qualities we celebrate in entrepreneurs today.

George and Ruth purchased their store in 1946. They were in their 30-40s at the time, but you could compare them to people in today’s millennial generation who look for careers that satisfy their passions.

For more than 20 years George had worked as an accountant for a Chicago meat packing company and, according to my grandmother, the job was affecting his health. They wanted something different, something that would get him out of the office, and offer them greater personal meaning.

When it came to buying their store, George and Ruth were as venturous as any entrepreneur today. As the story goes, one weekend while visiting family in Michigan, they saw a store listed for sale in a newspaper. They immediately checked it out and paid a $500 down payment. Two months later they moved their family from a very settled, big city life in Chicago to the unknowns of rural (hicksville) Henderson, population 250.

Isn’t that intriguing? I guess we’re not the only generation who dreams of escaping the confines of a working cubicle, whether literal or not, and moving off the beaten path to something we can call our own. 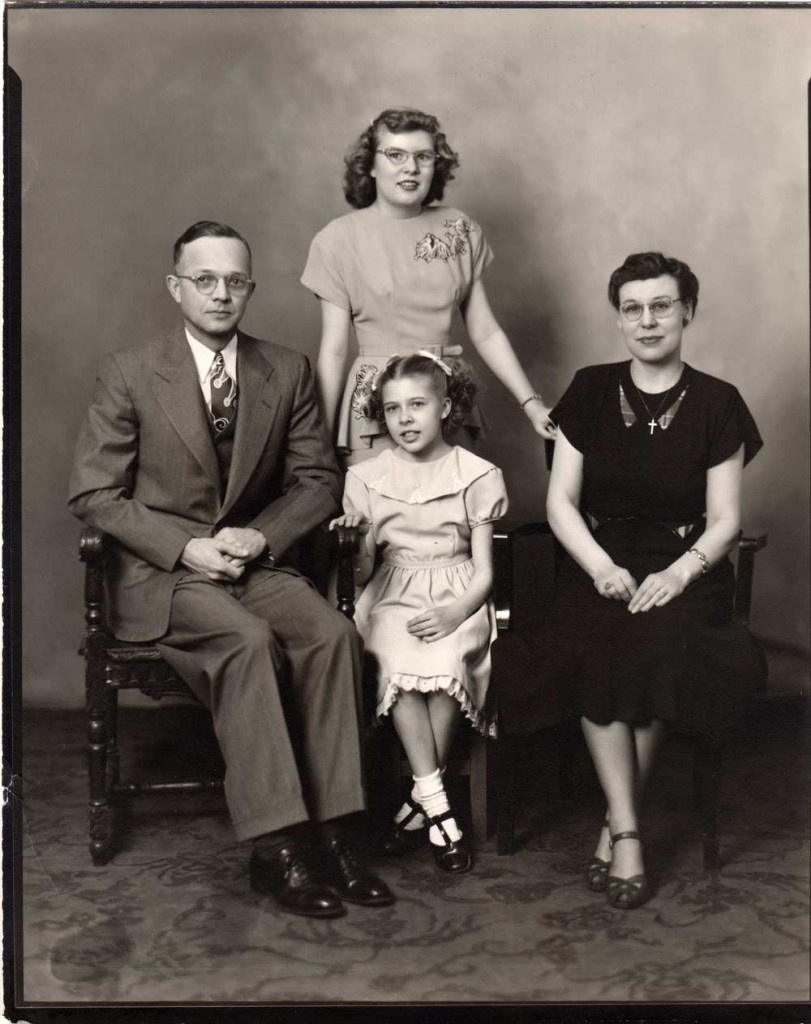 Okay, so here’s a picture of George and Ruth with their daughters in Chicago. Contrast this with the picture below that shows the family with friends a few years later in front of their store. Need I say more of their willingness to step outside their comfort zone?

Here’s a fun story my grandmother would tell of their move. My grandparents had nice furniture, including a baby grand piano, all of which they paid to have shipped from Chicago to Henderson in advance of their arrival. This, of course, created a great buzz of interest even before they themselves pulled into town. Today, might we consider this a calculating PR tactic?

And then there’s my grandfather’s ingenuity. He may have previously spent decades behind a desk, but he certainly didn’t lack for hands-on moxie in his store. According to my grandmother, he built all new shelving and a walk-in cooler. He learned to cut meat and updated the store with a glass meat counter and an ice cream freezer.

Isn’t it interesting what entrepreneurs take on nowadays? We not only practice our area of expertise, we also learn marketing, communications and social media. And if there’s something we’re better off not doing, it’s easy enough to search online for someone who can. 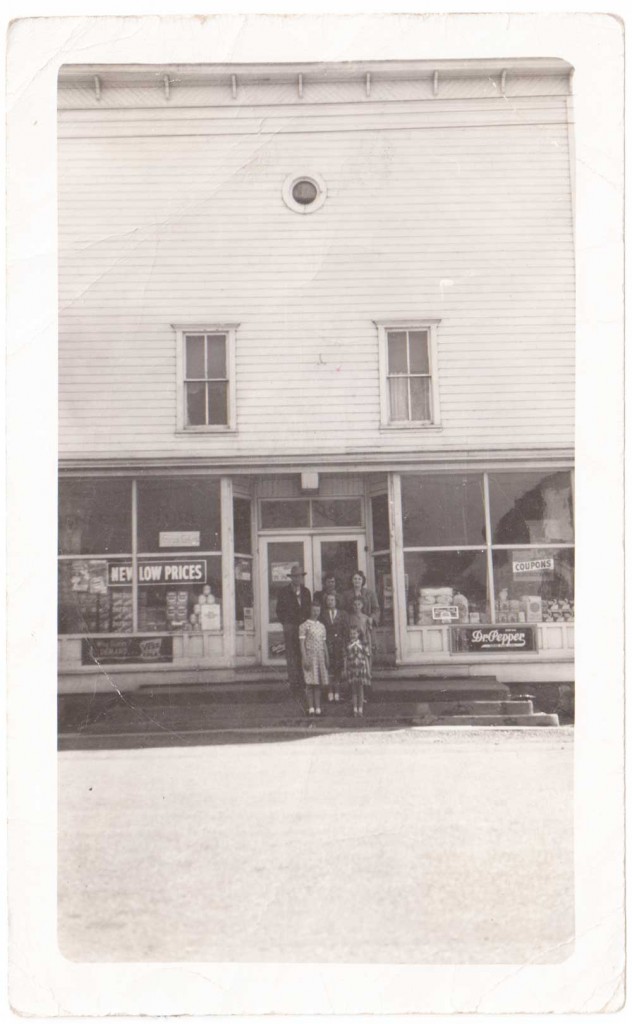 As I remember my grandparents, I imagine they would have carefully planned the realities of going into business for themselves. George was a qualified bookkeeper and experienced in the food industry. Ruth was a networking guru half a century before such marketing terminology existed. Yet, the skills that likely kept them going most were that of hard work, perseverance and understanding.

According to my grandmother, she and George worked side by side in the first years of their ownership. Then they decided the store needed updates. So Ruth took a job. At first she worked nights in a factory. After that she worked as a bookkeeper for a local business, a position she held for the next 14 years.

Many businesses today start out as side gigs to a day job. Just like my grandparents’ store, they need a few years of financial support, health insurance, or an all-around oomph of stability. I’ll be the first to admit I wouldn’t be enjoying entrepreneurship if I didn’t have the backing of my husband’s secure job.

My grandparents lived in an apartment above the store. The back stairs that merged their work- and off-work lives was ones they navigated many times a day. Such a setup was common in those days, wasn’t it? And weren’t businesses often family affairs that involved husband, wife and children?

How interesting that we’re once again returning to this concept. A great number of entrepreneurs work from their home offices. They participate in the day-to-day care of their children and they integrate work time with family time.

Are there any like-minded entrepreneurs in your family? We can learn so much from innovators of the past and apply that to how we work today. Tell us all about them!