Every March Forward Mutual Insurance Company hosts its policyholders’ meeting at the Ixonia Fireman’s Hall. Yes, the company presents its annual report, but probably even more important to this faithful crowd of mutual supporters are the door prizes, tasty luncheon and gathering together with longtime friends. It’s so very Wisconsin; I love writing such news!

Interestingly, in an era when “online content marketing” is all the buzz, sometimes an old-fashioned press release in the local newspaper is still the best. For Forward Mutual, this is one of those times. 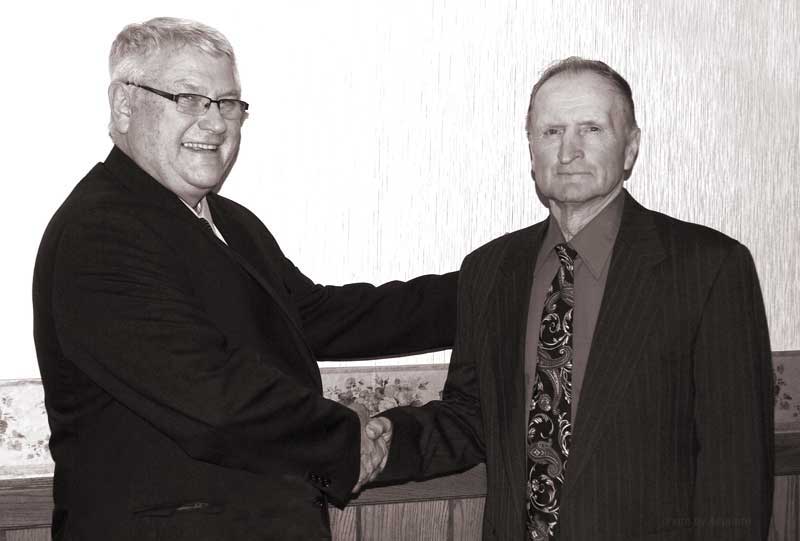 President and CEO Howard Wiedenhoeft represented Forward Mutual Insurance Company in expressing gratitude to Donald Bohn for his years of service as treasurer of the board of directors. Bohn announced his retirement at the company’s 138th annual policyholders’ meeting.

IXONIA, WI, (March 25, 2013) – Director Donald Bohn announced his retirement as a board member of Forward Mutual Insurance Company at its recent annual policyholders’ meeting. Bohn has served as treasurer for the Ixonia company since 2010.

“Don has been a strong leader for our mutual,” says Stephen Zillmer, Forward chairman of the board. “He is a quiet man, but when he speaks he has something meaningful to say. He is conservative, in that he’s careful to do what’s good and safe for the company. Yet he’s progressive, in that he supports moving into the future when he knows its best. We’re going to miss him here at Forward.”

Bohn has been a lifelong dairyman in the Watertown community and involved in local farm cooperatives. He is now retired from milking and enjoys working for Glacier Rock Farms in Lebanon, where he gives tractor rides to children visiting the farm.

Also at the meeting, policyholders re-elected David Blank, Randall Wegner and Dale Wolf to serve as board members. Other members of the board are Roger Degner, David Flood, Mark Mallow, Donald Reese, Robert Salov, Dale Zastrow and Stephen Zillmer. Zillmer serves as chairman of the board, Degner serves as vice-chairman and Reese will serve as secretary/treasurer.

Forward Mutual Insurance Company provides insurance to home and farm owners in 16 counties throughout southeast Wisconsin. It maintains a policyholders’ surplus of $5.2 million and an A.M. Best rating of A minus.

“Forward Mutual is the only town mutual in Wisconsin to have an A.M. Best rating,” says Wiedenhoeft. “As our organization grows in many ways, we’re confident about the future and await the challenges that lay ahead.”