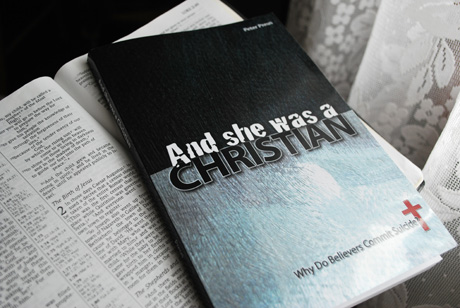 Seven years ago, when my 20-year-old nephew died by suicide, one of the most painful things for his parents was the judgmental assumption many people made of his eternal life. At a time when his parents needed comfort the most, the long-held stigma of suicide created a reluctance to minister to them with the hope of salvation.

What people forgot, however, was that this beautiful, young man was a believer. He was a child of God. Like many people who kill themselves, he suffered from depression. Yes, it caused him to sin. But no, it did not overrule God’s loving grace. And just as we are saved by this grace in spite of our sins, so was this young man.

A book recently came out that my nephew’s parents recommend people dealing with suicide should read. It’s called And She Was a Christian, written by Peter Preus, a Lutheran pastor. His wife also suffered from depression and committed suicide in 1994.

This book must have been hard for Preus to write. He shares his wife’s story, from her days as a vibrant wife and mother, very involved in her church; to a woman destroyed by mental illness, very depressed and delusional.

Preus also covers a historical study of the church’s viewpoint on suicide. Today’s Christians commonly believe the Bible makes a black and white statement on suicide, but according to Preus, this viewpoint wasn’t always shared. In fact, many early Christians committed suicide as an alternative to the “horrifying and humiliating forms of execution,” as Preus writes. It was St. Augustine, of the fourth century Catholic Church, who determined suicide to be an unforgivable sin. I found this quite interesting.

Because this book is specifically intended for pastors and church professionals, Preus goes deep into the doctrinal aspects of suicide. I’m neither of those and I strive to maintain the “faith of a child” (meaning I intentionally shy away from debatable theological discussions). Admittedly, Preus is over my head at times. But he does make it clear, even to me, that Jesus’ dying on the cross is payment for every sin, even the sin of suicide.

1 thought on “Why Do Believers Commit Suicide?”