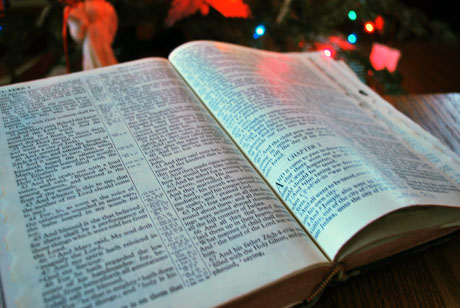 On Christmas Eve my family reads Luke 2, the story of Jesus’ birth. We read it from the King James Version of the Bible (KJV) because of it’s graceful, poetic language. It’s the Bible of my childhood.

It’s not that I’m old or anything, but this year the KJV is celebrating its 400th anniversary. In four centuries, has there been any other book that has communicated so much to so many people? I think not.

According to National Geographic, in its December 2011 story (that National Geographic does such a piece says so much), the KJV was used by every U.S. President to swear his oath of office. It’s also the Bible of choice for the Very Reverend Dr. John Hall, who married Prince William and Kate Middleton.

The National Geographic story is interesting. It tells of the tedious work of translating Hebrew, Aramaic and Greek into an English language that even the common man could understand. It also points out the many KJV phrases that are classic to our language still today; phrases like “A man after his own heart,” or “Turned the world upside down,” or “From time to time.”

Here’s another interesting link on the KJV. It’s an illustration put by the University of Leicester and it compares the Gothic Blackletter font used in the original 1611 edition to the Roman font used today. Even the layout in Roman looks somewhat outdated by today’s print standards, doesn’t it?

Nowadays, the New International Version of the Bible (NIV) has replaced the King James Bible. Yes, it’s a more contemporary style of English, and, yes, it’s easier for most of us to understand. But for Christmas— for that beautiful story of Jesus birth—I still love the old way of doing things.

I love reading Luke 2 from the King James Bible.