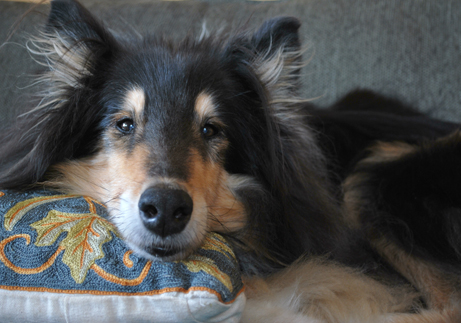 Let me introduce you to Clyde, my office manager.

For years Clyde has accompanied me throughout my work day. He just kind of hangs out and makes sure things get done. Whenever I turn away from my computer he’s always there, eyeing me with a cocky grin.

“Either get back to work,” he’s probably saying, “Or take me outside for a walk.”

In his younger days, Clyde’s self-imposed job description was much more intense. He herded my sheep (in reality he ran into the center of the flock and scattered them). He chased rabbits in the woods (and came home full of burrs and ticks, much to my ire). And he protected the homestead (okay, maybe that’s a stretch, but I liked to think he would if ever put to the task).

In the last year Clyde has taken on a decided semi-retirement. His nearly 13 years are showing in many ways. He’s lost his voice so his bark is now a whisper (actually, a softening of that intense yip has been rather nice, as any collie owner knows). Lying down requires more and more circles. In amusement, we count five…six…seven turns before he finally coordinates a clumsy drop. He’s lost strength in his hindquarters so standing now involves a slow giving out of his rear suspension. We give him an extra hug for support and speculate he’s learned to do this for attention.

Through it all, Clyde never seems to mind. He’s cluelessly happy, because that’s the dog he’s always been. He’s never snapped at or bit anyone. He doesn’t appear to be in any pain. These quirky symptoms of age just add to his endearment.

A week ago Clyde wandered from home in just a few minutes’ time. I called and called, and began to worry. My neighbor found him circling aimlessly in the middle of the road about a quarter mile away. This neighbor, who makes the real dog whisperer look phony, explained in a most sensitive way that a dog’s primal instinct is to leave the pack when it’s time to die. She pointed out what I had chosen not to see, that Clyde has withered away to just skin covering bones. I was forced to admit the look in his eyes hasn’t been the same.

I’m afraid my office manager is ready to retire. I’m afraid he’ll wander away and I won’t be able to find him.

I’m afraid of the longing look in my beloved dog’s eyes.